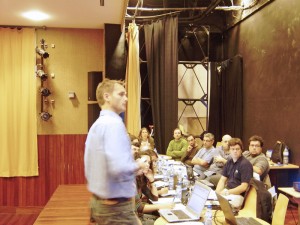 Leading environmental groups and rehabilitation centres in Portugal have joined forces to be better prepared for an oil spill incident. Cooperation between these organisations was first explored at a meeting that was held immediately following the RIOS workshop in April. Since then, two further meetings, in June and October, have taken place. Sea Alarm moderated all three meetings.

At the most recent meeting, the group decided to formalize their cooperation in a Memorandum of Understanding and start developing a national oiled wildlife response plan with the help of Sea Alarm. The Belgian wildlife response plan will be used as a model and a first draft will be discussed in March 2009. Portuguese wildlife authorities and the Portuguese Navy were present at the last meeting. The Navy expressed its full support of this cooperation and offered assurances that a wildlife contingency plan developed by the group would be integrated into national plans.

In May, Sea Alarm and OSRL/EARL also facilitated the inclusion of the wildlife aspects of a response in an ARAMCO oil spill exercise in Lisbon. Portugal’s national response plan was tested and the National Institute for Biodiversity and Nature Conservation was invited to deal with the response to oiled wildlife.

Copyright Sea Alarm
Back To Top
×